Don’t worry – I wouldn’t think of getting political. But I would like to give a history lesson on how U.S. presidents have benefitted from disruptive innovations, giving candidates with the vision and ability to leverage such innovations an overwhelming competitive advantage. There are also some important lessons for business.

Much discussion in recent years has focused on how presidential candidates use technology innovations, for good or ill – from polling to Twitter to fundraising to get out the vote. But technology use has been an important factor almost since the start of our republic. Following are examples of disruptive innovations and presidential candidates who leveraged them throughout our history:

Candidates with the vision to marshal resources, deploying people and processes around these disruptive technologies, have enjoyed real competitive advantages when communicating their messages to the masses in unique new ways. However, it’s not just about using the latest innovations. Kennedy and Nixon were both on TV during the debates, and many candidates used whistlestop train tours, but Truman brought it to a new level, Obama leveraged the internet effectively vs. Romney, who did not.

There have been many effective uses of disruptive innovations in business: 802.11 for wireless data transfer, the cloud, digital printing, search engines, wireless telephony. In each case, the winners were companies that were the most adept at surrounding these new innovations with the right people and process at the right time. Many failed because they underestimated what was involved to drive success, or they misjudged the timing – e.g. the 1998-1999 dotcom bubble.

The lesson for B2B sales, marketing, and product executives: Technology by itself does nothing. You cannot drive success by simply being aware of and leveraging innovations. You must closely monitor technology disruptions that impact your firm and industry, consider the timing of deployment, and surround use cases with the right people and processes. The payoffs and potential competitive differentiation are huge for firms with the vision to tap the power of breakthrough innovations. 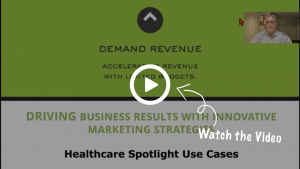